How and where I put the inside shower.

As you can tell by this picture something interesting has happened to the truck.

It’s time to commit on the shower. This job has been haunting me since the beginning. It’s a big job that has had me staring at the floor and walls for some time now. I decided to get out the sawsall and go for it The cutting was very slow. Wheeled coach puts 1/2 inch aluminum plate under much of the floor.

After a couple hours of sweating and swearing I had a big hole in my floor. There is almost 5 inches between the top of the floor and truck frame. Plenty of room to put in an insulated shower pan.

Easy access to the driveshaft and air compressor if need be. Not for long though.

Dad and I made a frame from 2×2 aluminum.

Cut a sheet of aluminum to go into the bottom.

Build a receptacle for a bell type pee trap. Now that I’ve used it some I’d say it works ok. It does catch sand which is nice but doesn’t drain as well as it should.

This shot shows us trying to get some slope in the pan. We got some, but not near enough. I later had to epoxy the bottom of the pan to get more slope.

The completed shower pan ready for the bell trap. I also went under the truck and glued pink foam to the bottom of the pan to try and insulate it a bit. Worked well actually. 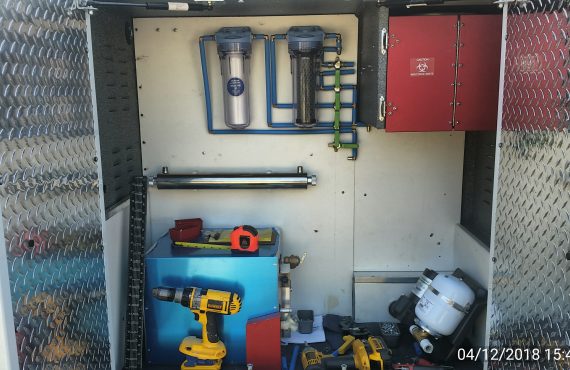 Getting started on Plumbing I think this is going to be one of my favorite parts of the build. It took...